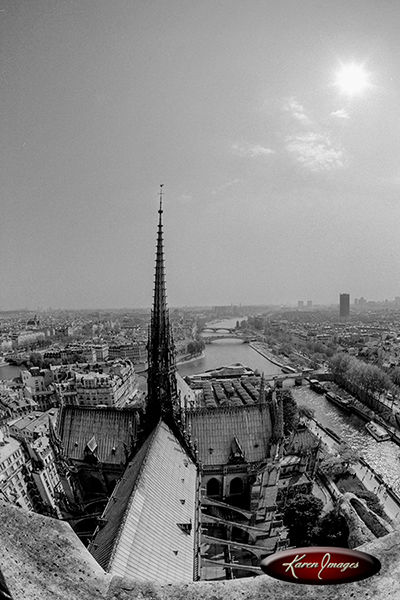 April 2, 2002, Karen and Troy Burns landed in Paris and hit the streets to shoot the city. Armed with two Canon A2 35mm’s, a Mamiya 645 Pro, and a Canon EOS 630 35mm HIE Infrared Camera, they photographed for four days straight, including an entire afternoon at Notre Dame de Paris Cathedral April 4, 2002.

Troy remembers, “Paris was like the pandemic in lockdown due to 911, and travel was still a fear for many after the planes crashed into the Twin Towers. You could walk straight up to a register at the Louvre and buy a ticket. Paris store owners were walking out to meet us on the sidewalk speaking English. It was like we had the entire city to ourselves.

Karen recalls, “We photographed this image of the roof of Notre Dame de Paris Cathedral looking up the Seine from the tower of Notre Dame. This is frame 24A on a roll of Ilford FP4 125 ISO Black and White 35mm film. It is from a series of images shot of the Spire and is the best vertical image captured with a 14mm Fisheye lens which is warping the edge of the balcony of the tower.”

Troy continued, “We later started renting our images to the film industry and this image is at the 6:29 scene opener of Season 2 Episode 8 “Woods” of Donald Glover’s Atlanta.

From Wikipedia: “On 15 April 2019, just before 18:20 CEST, a fire broke out beneath the roof of Notre-Dame de Paris Cathedral in Paris. By the time the structure fire was extinguished the building’s spire had collapsed, most of its roof had been destroyed and its upper walls were severely damaged. Extensive damage to the interior was prevented by its stone vaulted ceiling, which largely contained the burning roof as it collapsed.”

Karen remembers “We were in tears as we watched the fire consume the roof when the spire collapsed on live television. We thought of this image that had just appeared in Donald Glover’s Atlanta and wanted to find a way for our photograph of the spire to help with the restoration of a new spire for the roof of Notre Dame de Paris.

We followed the controversies of the reconstruction discussions since 2019 which are now resolved. Notre Dame’s roof and spire will be rebuilt exactly as it was the day that it burned with wooden beams, wood spire, and the controversial lead roof. With the popularity of NFT’s, and reconstruction efforts on the path to completion, we minted the world’s first Real Fungible Token, Spire Over the Seine on January 1st, 2022.”

On 02.2022 National Geographic published the new issue with the fascinating cover story, Notre Dame Rebuilding an Icon, that goes into great detail on the construction, history, and renovations of this amazing cathedral. It is our hope to deliver a significant contribution to Friends of Notre Dame de Paris on April 4th, 2022, the 20th anniversary of our day spent photographing Notre Dame “

The Spire Over the Seine RFT includes the 18″ x 22″ (framed 30″ x 35″) silver gelatin print that appeared in the series Atlanta, the negative it was recorded on, with the rights of reproduction and resale. The image was printed in our first home darkroom on a Beseler 4″x5″ enlarger in 2003 that we still have in our home today.

The print and the negative are both tangible, they are Real. The negative can print another image just like the print (although it will not be the print that appeared in Atlanta) making it a Fungible item. Because it is a copyrighted work, the negative is the Token that contains the rights to print, publish, and license the image.

Like NFT’s, RFT’s contain an Artist’s Royalty of 10% on resale of the image, prints from the negative, licensing, or the sale of the negative. The rights of reproduction are tied to the negative only.

Proceeds from the sale of the RFT will also benefit Friends of Notre Dame de Paris and help fund the return of the Spire of Notre Dame to the skyline of Île de la Cité for future generations of photographers, tourists, and citizens. Register below for updates on the auction.

Interior designers, members of the trade, and galleries are welcome. The auction date will be announced soon.

You can also donate directly to the restoration

Please submit this form for more information, or to place a bid on the Spire Over the Seine RFT